Our Favorite Family Characters at the Thanksgiving Table 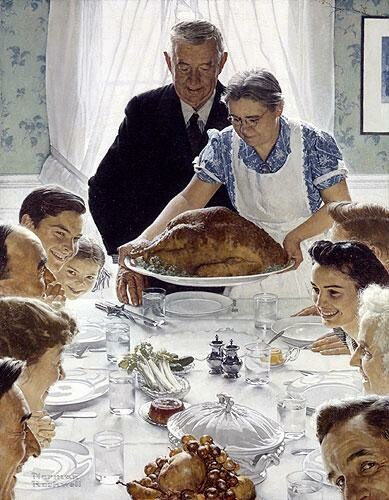 What would we all do without our family characters, the ones who brought life and laughter to the Thanksgiving table?

I asked our team what their favorite family characters at the Thanksgiving table were. Here are the results, enjoy.

My granny would never let any of us go hungry, the thing is she loved her giblet stuffing cooked inside the turkey… nice and greasy. She also loved that mincemeat pie!  Out of respect we all had to partake a little of her signature dishes.  She loved to sing and dance as we tried all her “yummy” creations.  The highlight of the day, for real, was getting the wish bone.  I always got the wishbone since I was the oldest girl.  Getting that wish bone every year, even now, excites me.  I love the holidays.  Julie Pankey 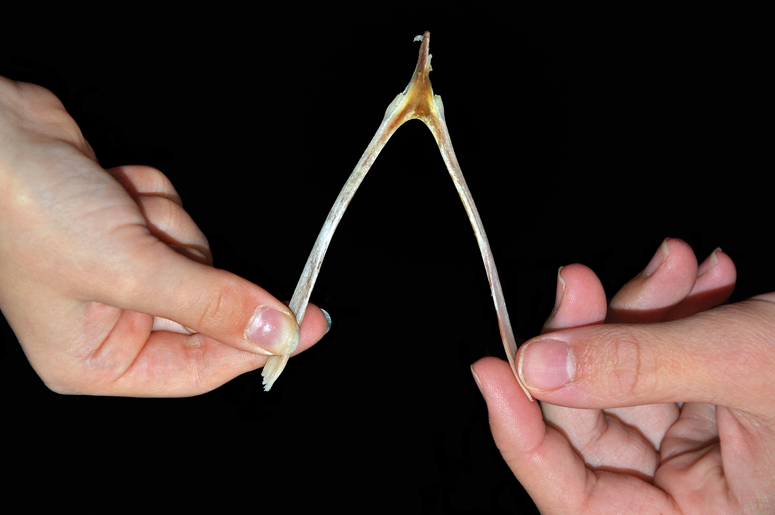 How to Win the Wishbone

I think my best memory of Thanksgiving is my maternal grandmother Flossie teaching me how to make gravy that isn’t lumpy.  I can just see myself as a young girl watching her whisk milk into the roux very slowly so that there were no lumps.  I don’t make gravy very often, but when I do, I think of her.  Kim Williams 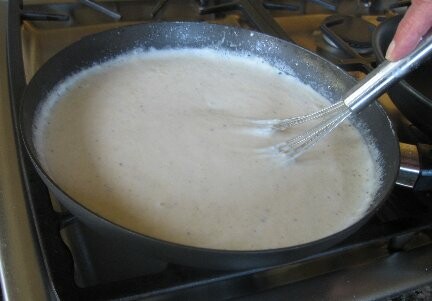 When I was a kid, if we had Thanksgiving at my maternal grandmother’s house (“Goggie”), it would be interesting at carving time. My Uncle Frank, who was famous for taking movies at all family events, was technically supposed to carve the turkey. But it was hard enough to get him to sit down to eat (“Frank, sit DOWN!”), so my Dad would take over. That’s when I learned about sharpening a knife on a steel, a life-long skill! Plus, how to attack the big bird without hacking it has served me well in my own home. Happy Thanksgiving to all!  Peter Scherman 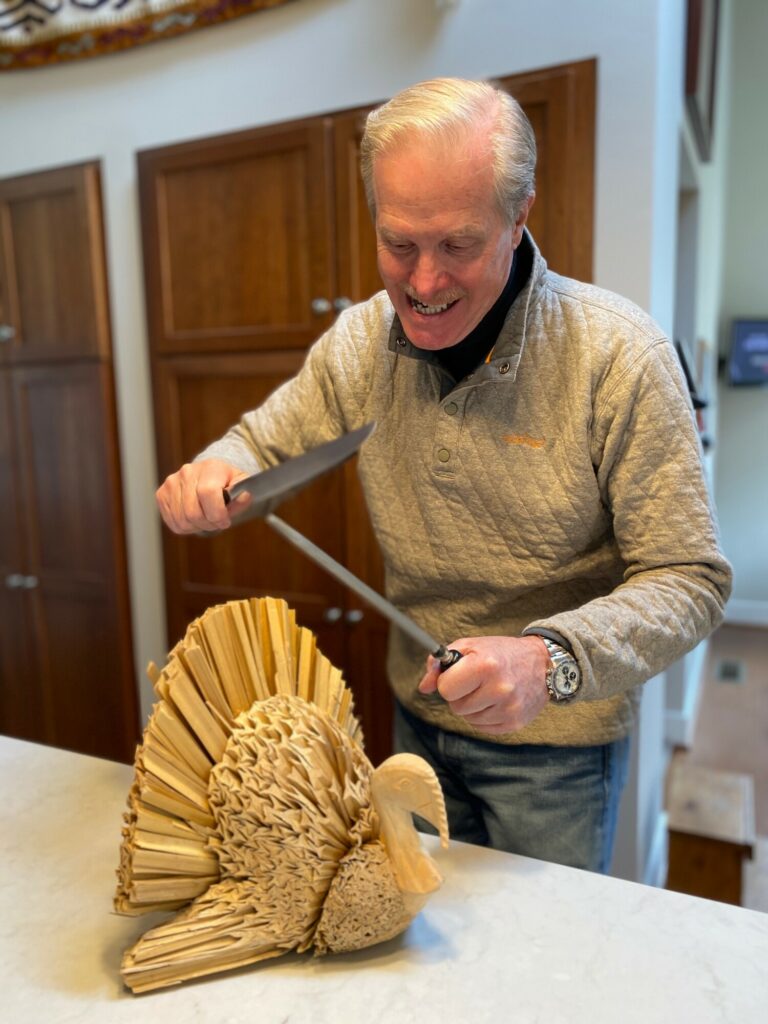 It’s Thanksgiving and…..What???? No turkey????!!!! That’s right. No turkey. At least no turkey for me in my growing up years. Thanksgiving morning my parents and I would make the 15 minute drive to my dad’s parents home. There we would join my grandparents, aunts, uncles, and little cousins for an early afternoon feast. On the table would be all the usual dishes but no turkey!! Instead the beast of honor was a goose!!! Can you believe it? I guess it tasted OK, but it wasn’t turkey.
Then later in the day, another short drive to my mom’s parents home. Again, grandparents, aunts, uncles, and noisy little cousins. Grandma’s Thanksgiving dinner consisted of Waldorf salad, Parker House rolls and…..a big baked ham. A beautiful ham crosshatched, stuck with cloves, and trimmed with pineapple and maraschino cherries. It was good…but it wasn’t turkey.
So now that I’m all grown up with children and grandchildren of my own, you can bet that on Thanksgiving we will always have turkey and all the fixings it deserves. Peggy Scherman

My grandmother Ga Ga could never sit still for more than 10 minutes and when she moved, she sprinted and twirled and dipped like a dancer. She was also a good cook. No one in the family would dare suggest that they make the stuffing or the pies (pumpkin and sugar pie). It was a given it would be Ga Ga. I can still see her bending over the open oven door basting the bird, probably more often than needed. Most likely every 10 minutes! My Ga Ga WAS a character, a bit gossipy, a bit pushy, a bit critical and vane but I loved her anyway. I remember her for her vibrancy and the way she whirled through life. And her pies! Janet Wolf 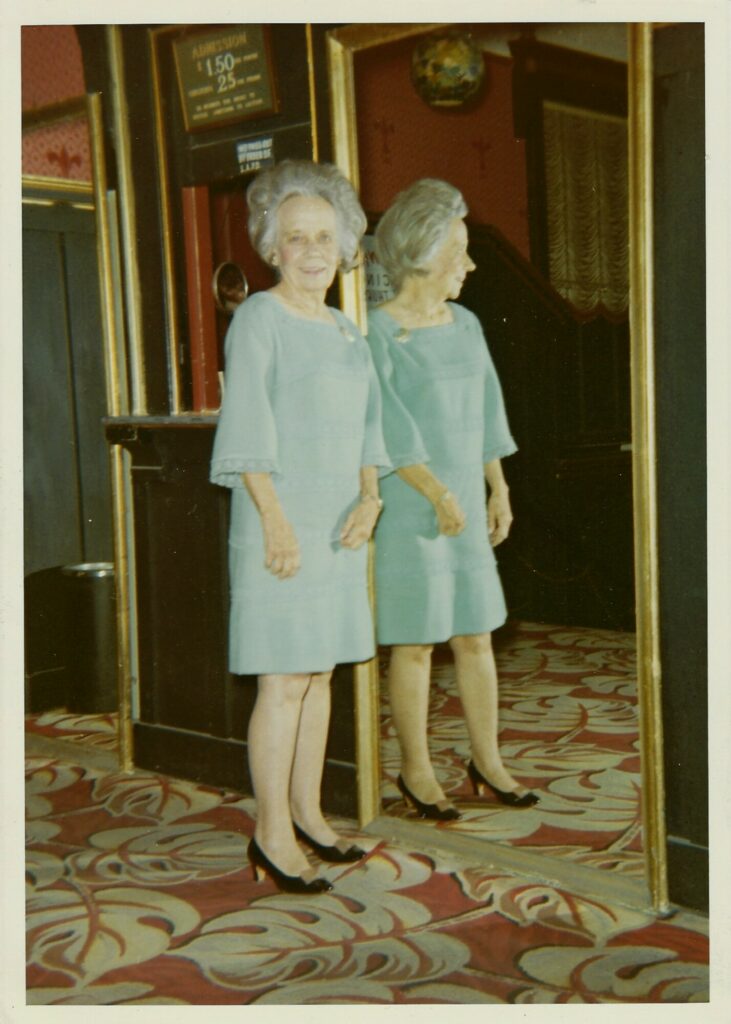 Ga Ga posing before going to her Friday night dance

As my siblings and I started families we would gather with my parents and always, someone would pick up Aunt Lil.  Our Aunt Lil was widowed, and had one adult son with a family living far away so she was always a part of our gatherings.  Aunt Lil was her own person, full of life, always loved to travel but also very much noted for wanting to “stand out”, “be heard” and have fun!  She was a hoot!  Aunt Lil was my mother’s oldest sister (she had 6 sisters) and part of immigrant parents from Poland.  A must have for our Thanksgiving table was and still is fresh kielbasa with sauerkraut.  Yum! So here’s to Aunt Lil (whose actual name is Eleanor). Now, as a new widow and with children in other parts of the country, I aspire to your zest for life and to be heard!  (But, I don’t aspire to her eagerness to grab the microphone to sing at weddings!) No way!   Marilyn Bushnell 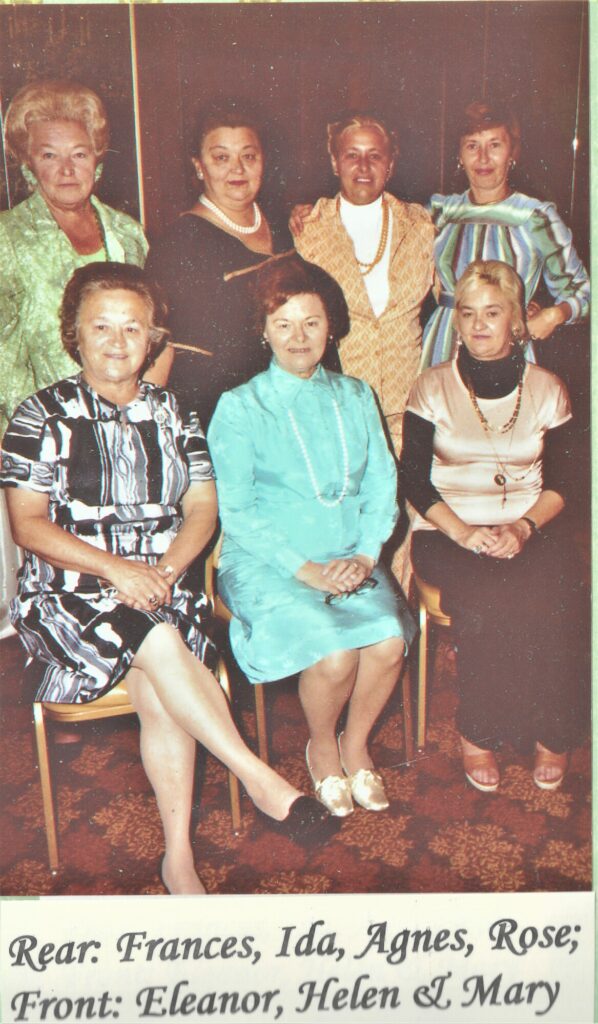 “These 7 sisters, daughters of Polish immigrants, were all a hoot! But, the oldest and most notable was Aunt Lil! Oh the laughs they had (usually speaking Polish so we couldn’t understand!)”

It’s hard to think of a single favorite character from Thanksgivings over the years. The Thanksgivings of my childhood had a different cast of characters than those of my college years, which were different than my young-married years, and then my years as an innkeeper. Now I am in the ‘hoping-for-grandchildren years’ and am one of the “characters” at our niece’s Thanksgiving table. I hope I am a favorite!  Tish Dalton

The character pictured here had occasion to be included in the Thanksgiving meal at our Inn. Known as the French Carver, his serendipitous arrival to the oohh’s and aahh’s of all gathered, and with a large carving knife in hand, was met with both curiosity and caution. He would gesticulate wildly while carving the “bird” muttering all the while for the assembled group to pay close attention to his culinary carving techniques perfected while being in close proximity to Le Cordon Bleu. As soon as his task was complete the French Carver would ceremoniously depart while muttering phrases like “etre au taquet” or “Ah, la vache” which none understood. When remembering him, I smile wistfully, being grateful for all the characters of Thanksgiving past and looking forward to all those of Thanksgiving future. Eliot Dalton 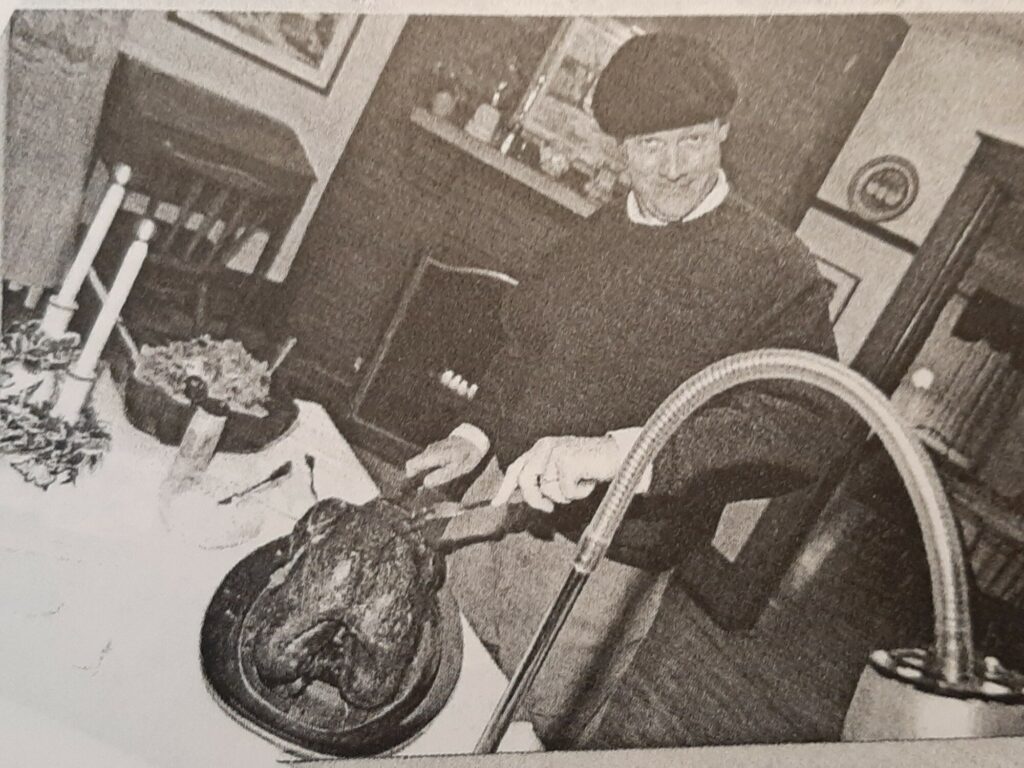 The Mysterious French Carver (Its’ Eliot!)

As the only child of parents who chose to live in Florida, far away from my many cousins at holiday time, Thanksgiving was usually just the three of us.  Certainly, in many years, various friends would join us and then married with children, we more than doubled the seating at my parent’s table.  Probably the turkey was the main character since no matter how small the turkey was in my childhood days, the day was focused on prepping the bird, cooking the bird, then carving and enjoying the bird. The bird carried us through the weekend with hot turkey sandwiches, turkey salad and more. Linda Hayes 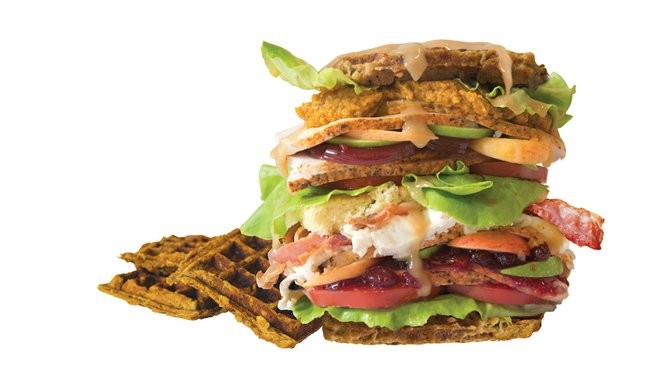 Its’ all about the stuffing!  As a kid, two of my parent’s best friends were  Chuck and Terry Fey. My Dad and Chuck played Pebble Beach yearly as their golf treat. I remember going to their house overlooking the California coast range that separated the SF Bay Area from the Pacific Ocean. But the memory that comes around every year is Mr. Fey’s turkey stuffing recipe. This adopted recipe became a tradition and a part of my Thanksgiving and is still to this day.  Making it was almost a celebratory event that was later shared as an adult with my folks when they would come east to visit Jan, Justin and myself !  Even today, when we have Thanksgiving at home, out comes the well-worn, well used and always delicious recipe for Chuck Fey’s stuffing!  There was one year when things did go awry………….whatever amount of parsley was called for, someone (?) goofed and added 10X the amount.  Think it may have tasted ok, but is sure was very, very, very green! Happy Thanksgiving to all and to all a Good Stuffing! Rick Wolf 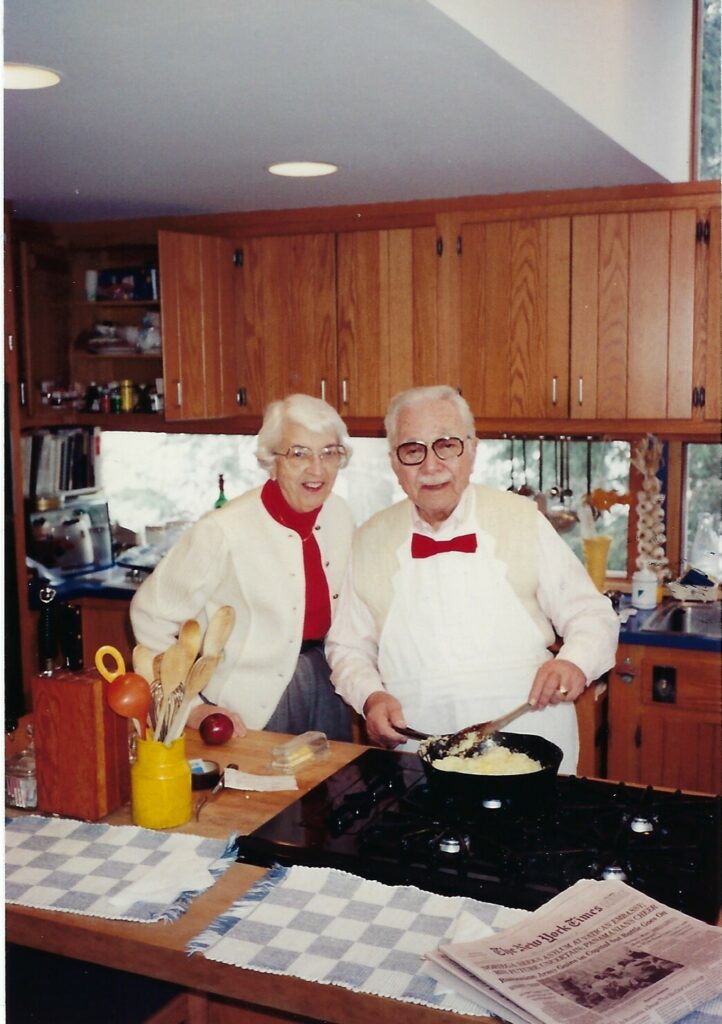 So raise a glass to Aunt ‘Lil, Goggie, Ga Ga, Flossie and Julie’s Granny. And a rousing toast to Chuck Fey, the French Carver, the illustrious wife of the French Carver Tish, and Linda’s turkey sandwiches. And wishing Peggy all the perfectly carved turkey she can eat. Plus all the past and future characters at your Thanksgiving table.

Have a wonderful Thanksgiving Day

Note: Sugar Pie originates from Ohio Shaker country. It is also similar to traditional Canadian Sugar Tarts. Our family always thought it was a Ga Ga original until I recently did some research. It’s real sweet. That is why we loved it as kids.

This entry was posted on Thursday, November 21st, 2019 at 2:05 pm and is filed under Innkeeping Business. You can follow any responses to this entry through the RSS 2.0 feed. Both comments and pings are currently closed.