Lessons from a Life Spent with Inn Guru Bill Oates

The Innkeeping world has lost one of its pioneering members with the passing of Bill Oates on Monday, November 22. Bill’s influence on the industry is immeasurable, and his legacy is carried on by industry professionals, consultants, brokers, and the countless Innkeepers who were his colleagues and close friends.

I had the great pleasure of knowing Bill not only as a mentor and “the Innkeeping guru,” but as a grandfather and partner in travel from before I could distinguish one lodging property from another. Later on, as Bill’s Parkinson’s Disease limited his mobility, I was called on to traverse the country by his side and was constantly reminded of his passion for the Inn business and, more so, the guests and Innkeepers who make the Inn experience so truly transformative. As a celebration of Bill’s life, I wanted to share a few guiding principles gleaned from our time working together.

Seek Adventures. It was a somewhat circuitous path that carried Bill from his early years as a student of Southeast Asian History writing a dissertation on a peasant revolt in East Java to years spent in artist enclaves in Greensboro, Vermont, to his years as a “hippie” and natural food store owner to his final role as a country business broker turned Inn-consultant. Bill was a true iconoclast and carried his passion for all things through his many professional careers.

Seek Education. Bill was a longtime supporter of the myriad Innkeeping organizations, including the now named Association of Lodging Professionals and Select Registry. Education and camaraderie with like-minded individuals were some of his “key ingredients” for success in this industry. In moments of industry fragmentation, Bill saw (and filled) the need to create markets to keep the Innkeeping trade alive. He was often discovered with both the Wall Street Journal and New York Times under his questioning gaze. (His recommendation: if you avoid the op-eds, you can typically steer towards some truth!)

Seek controversy. Bill did not shy away from controversial topics or positions. In fact, he welcomed controversy and viewed it as a way to transform ways of thinking and used that position to guide the Innkeeping industry forward. To his mind, controversy was the genesis of open and meaningful conversations which were often the source of great progress.

Seek Stories. Bill found the greatest joys in working with Innkeepers and seeking stories in financial statements. For him, “The Numbers” were a vast historical manuscript that, if held under the right light (or set of eyes), could tell the story of a life well-lived (or in need of guidance) in a series of figures, decimals, and percentage points.

Above all else, Bill had a loving and passionate personality. It did not take coaxing for him to share his methodology or expertise with others. He looked at this sharing of information – with competitors as much as partners – as a method for sharpening his perspective and own business approach. For those who knew him well, Bill was exact and had equally high standards for his partners and associates. 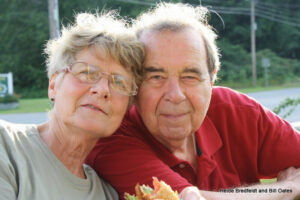 Those of you who knew Bill will have your own stories to tell or keep close to your heart. Others need only look to the vibrant expressions of hospitality at most active Inns, and you will find Bill’s influence, his vision, and his passion at play.

This entry was posted on Wednesday, December 8th, 2021 at 10:52 am and is filed under Innkeeping Business, Market Trends. You can follow any responses to this entry through the RSS 2.0 feed. You can leave a response, or trackback from your own site.